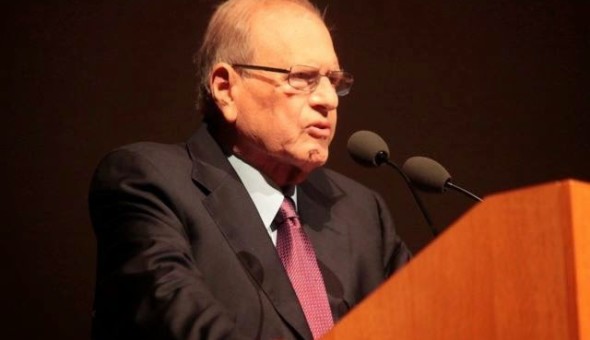 On behalf of the Athens Development and Governance Institute ADGI-INERPOST, I welcome you all to this event.  I feel I have to apologize again for any inconvenience this last minute arrangement may have caused you.  We have too many people standing but I think they will be remunerated when they hear Prof. Rodrik’s speech in a few minutes.  I would like to thank the National Bank of Greece for giving us this venue.  This episode serves as a reminder that, under the conditions that we live in today, we have to be flexible, to act with quick reflexes and adjust.  I think we have done well, thanks to the offer of the National Bank of Greece.

Today, we have the good fortune to hear an eminent economist, Professor Rodrik.  Professor Petrakis will introduce him to you shortly so I will not say anything about Prof. Rodrik.  But, I do want to make some comments about the topic:  Reforms.  First of all, I want to notice that in the recent years, especially in the last five “Troika” years in Greece, we have abused the term “reform” and used it to hide behind it actually fiscal austerity measures.  We are not talking about this kind of reforms.  We are talking about structural reforms that change economic and social equilibria and open up creative resources for development.  This is the subject Professor Rodrik will talk to us about.  In Greece, we have had many experiences with structural reforms, in fact, the whole post WW period we had nothing else but a series of structural reforms.  The account is very disappointing though.  Most of these reforms aborted, most were left unfinished, some were overturned, either by political or social events.  The factors have been many but, from my own personal experience, let me underline two factors which have been particularly important:

The first one was lack of government cohesion and discontinuity at the level of political leadership.  The second factor, which is equally important, was that the state apparatus is inappropriate to underpin a development process.  The state apparatus we have today is not “development-friendly”, it does not promote activities that would unleash productive and innovative forces but, on the contrary, because of the complicated bureaucracy, things are usually blocked in a way that leads to an impass and, in that context, because of the inability to find democratic solutions to conflicts, organized minority groups take the upper hand, take the role of veto players and block the reforms process.

Now again, today, we are in the midst of a new discussion about to embark a new reform process.  But we do that under unusual circumstances and, if you take into account all the factors involved, all these form a difficult puzzle, a conundrum, which is very difficult to solve.  Let me explain: Today, we operate under a three-year stabilization program which has not been our choosing but has been imposed upon us as a price for us to stay in the Eurozone.  We all know that the result of this program, among other things, will bring further recession, more unemployment and, certainly, social discontent when the measures that are in the three-year program will start being implemented.

At the same time, the Greek electorate gave a strong mandate to the government, to proceed with a growth process on the basis of structural reforms.  The question that arises is this: Can these two programs coexist?  Can a program of austerity work side-by-side with a development process which requires quick moves ahead or, to be more specific, when the measures of the three-year program are implemented, there is certainly going to be social discontent.  This social discontent will be a factor that will affect the development and reform process which requires as we all know solidarity and strong social support.  Or even more, under these social conditions, can we ensure that there will be social and political stability which are absolutely necessary for a growth oriented process to unleash financial resources, outside the fiscal area, that is private savings or resources from abroad to support and finance an investment process?

These are very difficult questions that cannot be answered a priori.  We have to see in the process how these can be resolved.  Perhaps, under the difficulties we are facing, we might give some considerations not to embark to a reform approach across the board but to prioritize and focus on some reforms at certain key sectors in the beginning and, then, proceed onwards.

These are questions that I wanted to raise and we are all going to listen with great interest at what Prof. Rodrik has to say about the experience in other countries.  We will again certainly gain some insight from that experience as to what our next step, here in Greece, should be.  Thank you.